Research As A Personal Journey

Wendy (Xiaoxue) Sun, M.A. '16 developed an interest in cross-cultural studies early, as a child who grew up in China and Germany. After graduating from Jilin University, she earned an M.A. in Comparative Literature and World Literature from Peking University. She entered the Graduate Program in English at Loyola Marymount University in 2014 and completed the program this past May. Sun will start her next chapter at University of California, Santa Barbara this fall, where she has been accepted into the Ph.D. program in comparative literature.

She learned about LMU from a friend in Beijing who was a graduate student at the School of Film and Television at LMU. Sun did research on the program and the school's reputation, and decided to apply. 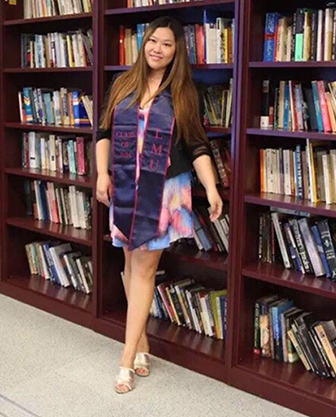 Her research interests before LMU were vague. "I wanted to do something related to cross-cultural studies, and something that could make my trilingual language skills useful. At LMU, I had the opportunity to do research with excellent professors and helpful peers and gradually found out what I want to do," said Sun.

Currently, her primary focus is in German literature. In an independent study last summer, Sun developed her writing sample for Ph.D. applications, which she further developed as her Capstone this spring. The writing sample is titled "Poppy and Memory: Darkness Spoken between Ingeborg Bachmann and Paul Celan."

Sun's secondary interest is in Chinese immigrant literature. Her ambition is to translate western novels that introduce feminist emancipation movements into Chinese in order to enlighten her people.

In a Contemporary Theory class taught by Steven Mailloux, Sun developed a third interest in translations studies. In his class, she did research on Heidegger's influence from the Chinese classic Daodejing (Tao Te Ching). Since Heidegger only had access to the German translation of the original Chinese language, he misinterpreted the original meanings. However, it is fascinating that it still helped him create a new perspective, and he was able to contribute new philosophical ideas to East-West dialogues.

"For me, doing research in literature is not only an academic pursuit but also a personal journey, in which I can use my language skills to wander through cultures and break linguistic thresholds, in the hope that one day it will lead me to the Tower of Babel" says Sun.

She plans to study Comparative Literature (German track) at UCSB. "The graduate directors and my department have supported me to go to academic conferences. I learned how to be a good teacher and am now excited and confident for my new journey. I think the small class sizes and office hours have helped me a lot. The professors were very patient with my non-native English, and I am going to start off my new journey from what I inherited as a Lion from LMU. I am proud to say that it was one of the most valuable experiences in my life.